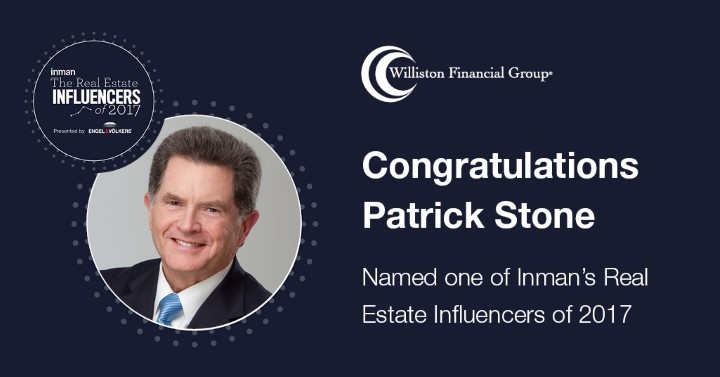 The theme of innovation and change is not a new one for WFG’s Chairman and CEO, Patrick Stone. But it’s nice to see others in the industry recognizing his ongoing efforts in that regard!

The WFG founder and industry icon has been honored by real estate publishing giant Inman as one of The Real Estate Influencers of 2017.  According to the publication “the Inman Influencers List salutes industry professionals who shape, change and influence the industry. They bring a mix of credentials, viewpoints and backgrounds from all walks of the real estate business. Some are creative, intuitive and gifted. Some have power, reach and charisma. And some are controversial, rabble-rousers and disrupters. All of our influencers contribute to change in one way or another.”

Stone has been honored by Inman twice previously as one of its “100 Most Influential People in Real Estate.” He is one of only a handful of settlement services leaders on a list dominated by leaders from businesses such as Google, Facebook, Quicken Loans, Zillow Group, National Association of Realtors and Move.  Stone’s longtime and unwavering efforts to bring integration, efficiency and collaboration to the mortgage industry did not go unnoticed by Inman, which stated “A steady hand, Patrick Stone, president and CEO of Williston Financial Group, has quietly worked to change the title industry with new technologies and innovations.”

Inman Influencers were selected by the publication based upon input from readers, editorial staff and other outside suggestions.