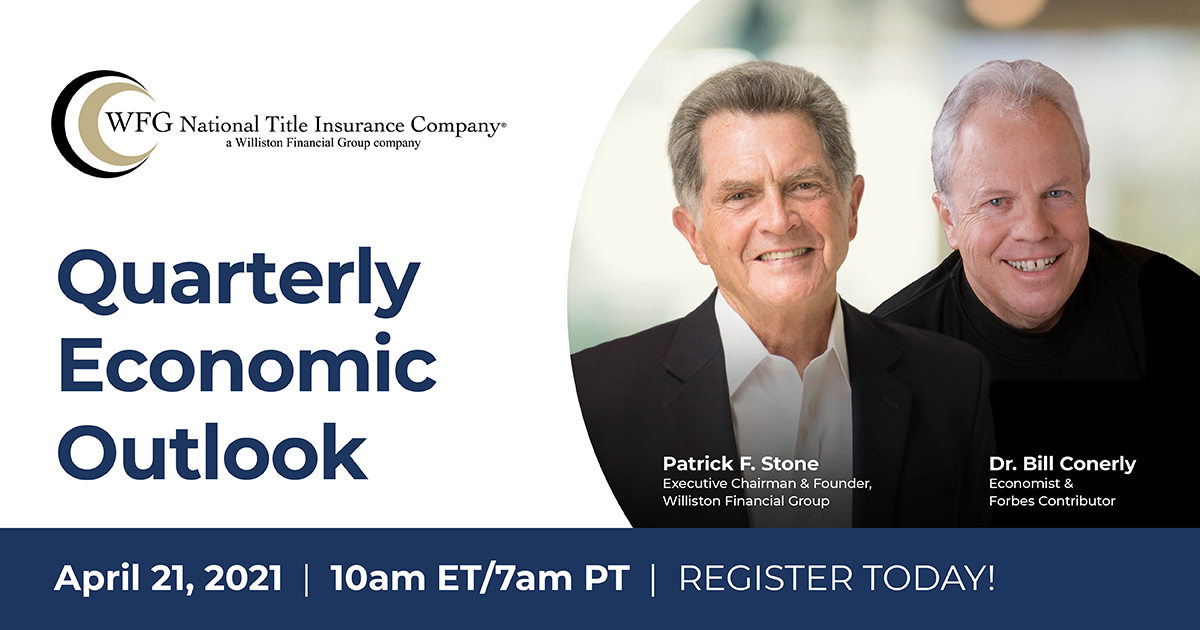 In their live April 21, 2021 webinar, WFG Executive Chairman and Founder, Patrick Stone, and economist Dr. Bill Conerly discussed prospects for economic growth, the real estate and stock markets, and prospects for housing inventory in response to questions submitted in advance by their growing audience of mortgage and title professionals.

The U.S. economy was the first topic, and Conerly expressed optimism that “by the end of this year, we’ll have most folks feeling comfortable going to restaurants, theaters, and traveling.  And as a result, the sectors that were weak are going to come back.  There’s plenty of stimulus, so I think that the rest of 2021 and 2022 is going to be a great year.”

“A lot of what we’ve seen is a fundamental reaction to the pandemic,” Stone said.  “Is it a bubble?  No.  Will it slow down?  Yes.  In fact, Fannie and Freddie both lowered their estimates for this year … Fannie Mae went from estimating about $4.5 trillion in mortgages [this year] down to about $4 trillion, and then $3 trillion for 2022.  Freddie Mac’s [estimate is] a little lower than that.”

“I think prices will continue to be very strong this year,” Stone continued, “estimating even up to eight percent in a lot of markets.  Then next year it will slow way down in terms of price appreciation.”

In response to related questions about housing inventory, Stone explained that we are still dealing with long-term effects of the Great Recession, which resulted in a drop of nearly 80 percent in new construction between 2006 and 2009, from 2.2 million units a year to just 478,000 units a year.

Homebuilding is starting to pick up.  “We’re running at about 1.75 [million units a year] right now,” Stone said.  “But we’re still way, way behind.  We have ten years where homebuilding was just waybelow where it should have been for the number of new households.”  According to Stone, it’s going to take about five years with homebuilding at the current level in order to get back to a point where we have enough inventory.