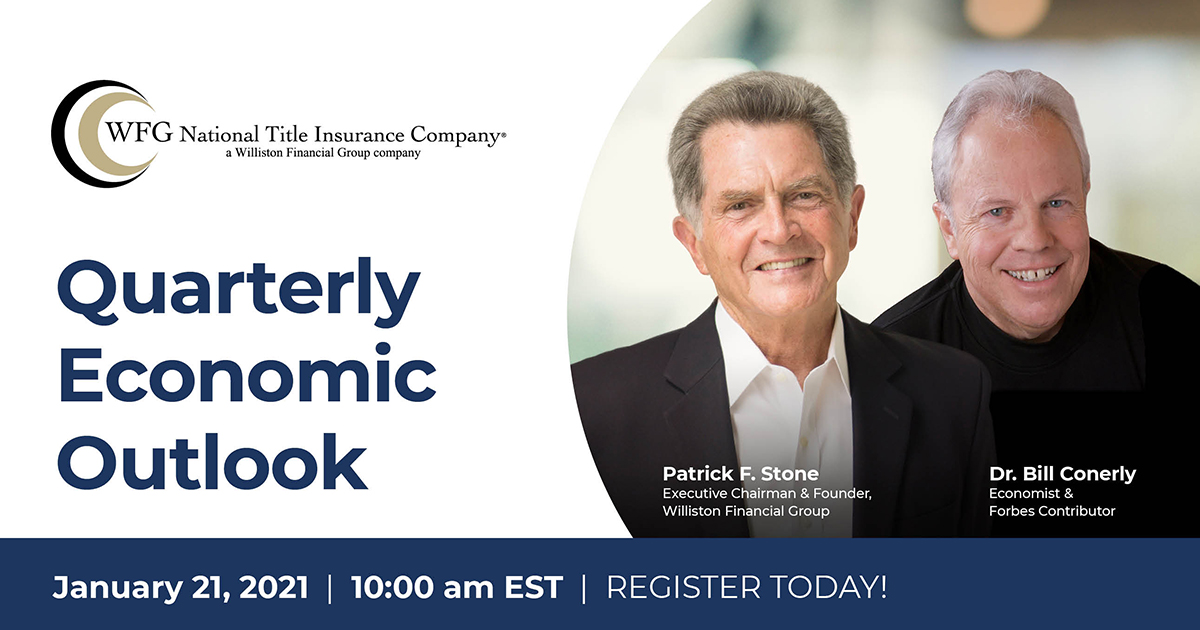 The forecast from the live Quarterly Economic Outlook webinar on January 21 was upbeat. The ongoing series, hosted by WFG National Title Insurance Company and featuring its Executive Chairman and Founder Patrick F. Stone along with economist Dr. Bill Conerly, left its audience with good reason to anticipate positive growth in the U.S. economy in general and the housing industry in specific.

“I’m fairly optimistic about 2021,” Conerly began, responding to the first of the questions submitted in advance of the live webinar.

A combination of positive economic factors at work during 2020 support Conerly’s prediction, but it all hinges on a successful national rollout of vaccinations.
“My forecast is driven by the idea that we’re going to figure out how to vaccinate people,” he continued. “The global outlook is pretty much the same as the national outlook and that holds for most communities in the U.S. [But] it’s all driven by Covid.”

Conerly believes that if a substantial portion of the population is immunized by midyear, it “will bring the economy close to full activity at the end of 2021.”

“Unemployment will decline, gradually, but it’s going to feel a lot better,” he said. “And then 2022 should be a good year at that point.”

Asked about real estate and housing, Stone reminded viewers that, even before the pandemic hit, “There was a growing level of demand fueled by a population bubble over the next 10 years in the 30-45 year age group. The first-time buyer population bubble is just about equivalent to what we saw with baby boomers.”
That demand was only heightened by the pandemic, he said, with low interest rates offsetting the increased valuations.

“And, right now in 2021 we could have the best resale market we’ve had in 35 years,” he continued. The biggest issue is supply and builders are ramping up very quickly. The National Association of Homebuilders’ confidence index is at or near its all-time high.”

Said Stone, he’ll be really, really surprised “if home sales aren’t up even significantly over 2020, which was a very good year.”