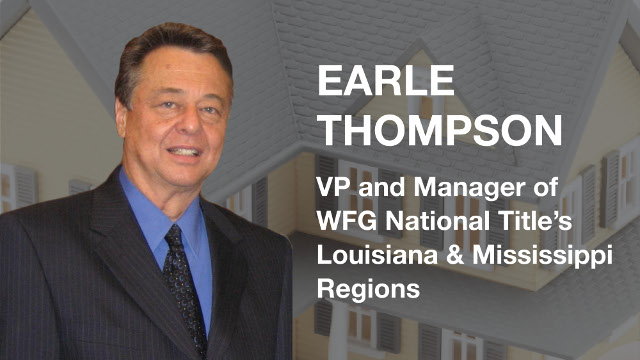 Thompson will remain in the company’s New Orleans offices and will continue to manage WFG National Title’s agency operations in Louisiana and Mississippi. Thompson was previously Vice President with the company, overseeing agency operations in Louisiana and Mississippi. He joined WFG National Title in 2012 after 17 years with one of the nation’s largest title underwriters, most recently as the agency manager for Louisiana. Before that, he served for seven years as a Vice President, State Manager with United General Title. He was previously a VP, State Manager for Minnesota Title Company, before which he served in the mortgage lending industry. Thompson is the current Secretary/Treasurer for the Louisiana Land Title Association (“LLTA”), and is a past president for that organization as well. He is a past president for the New Orleans Metropolitan Association of Mortgage Bankers. He has been awarded as the LLTA’s Title Man of the Year two times and has received the President’s Award from that organization as well. He played collegiate basketball at Louisiana Tech University, eventually transferring to Loyola University of the South (now Loyola University New Orleans), where he received his bachelor’s degree.

“Earle has played a critical role in WFG’s rapid growth in the Louisiana and Mississippi markets,” said Charles Cain, SVP, Midwest Agency Manager. “He knows the market…and the market knows him. His clients have come to expect his very best efforts on their behalf and know that he and his team are an exceptional resource for their agents.”

Earle Thompson may be reached at ethompson@wfgnationaltitle.com.

Portland, Oregon-based WFG National Title Insurance Company, a Williston Financial Group Company, is a national provider of premium title insurance and settlement services to the real estate and mortgage industry. The fastest growing national title underwriter, the WFG family was the nation’s eighth largest provider of title insurance at the end of 2013, three years after its entry to the market. (Based upon market share. Source: American Land Title Association http://www.alta.org/industry/financial.cfm). WFG National Title also delivers a wide variety of residential and commercial mortgage lender services, including default and real estate owned transactions. The company enjoys a Financial Stability Rating of A’ (A prime) as assigned by Demotech, Inc. Built around the directive to “communicate, collaborate, coexist,” WFG National Title Insurance Company is committed to applying a new philosophy to the traditional mortgage and real estate industry, working to meet the changing needs of its clients, agents and associates. For more information, please go to www.WFGNationalTitle.com.